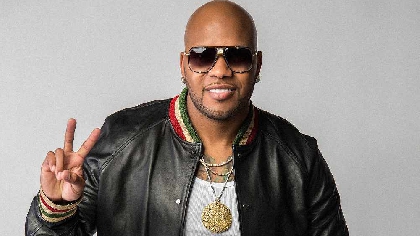 > He is doing this with Italian singer Senhit

“It’s such a good feeling to be back in Europe after so long,” the rapper said in comments released by the popular contest’s organizers. I’m very grateful to be able to perform once again, and on the biggest stage in the world.”

Saturday’s grand final features 20 nations from the two semifinals along with the so-called big five nations of France, Germany, Italy, Spain and the United Kingdom, plus host nation the Netherlands.

According to the BBC, The rapper features on singer Senhit's track Adrenalina, which will open the second semi-final on Thursday.

There was uncertainty before the event in Rotterdam on whether he would make it to the Netherlands, but he arrived from the US early on Tuesday.

In rehearsals, a stand-in has been rapping his verse as Italian singer Senhit performs.

Earlier this year, Flo Rida told Radio 1 Newsbeat he had no prior knowledge of the contest before he was approached to do his verse for the track.

"Senhit's people reached out to my people. The song is a high energy, which I love," he said.

Though the rapper is seen as helping to represent one of the smallest countries in the world, it really doesn't matter.  "I would love to go to Eurovision," he says.

"For those three minutes on stage, we're going to put on a huge concert," says Senhit.

Flo Rida appearing in person now means the US chart-topper is helping to represent one of the smallest countries in the world.

"He's an amazing artist and he did an amazing job on my song. It's the perfect match."

To perform at the event, Flo Rida has to be tested every 48 hours for Covid-19.