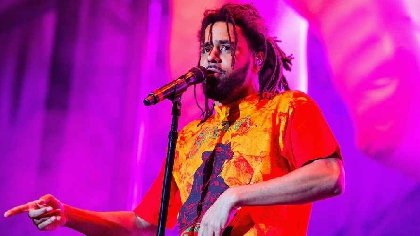 He's expected to play three to six games during the season

Grammy Award winner, J. Cole is taking his talents to the court. The rapper has signed a deal to play basketball in Rwanda later this year, ESPN reports.

According to ESPN, the North Carolina rapper signed a deal to play in the Basketball Africa League with Rwanda’s Patriots BBC. Cole is expected to play three to six games during the season with his signing reportedly becoming official on Thursday (May 13).

The African league consists of 12 teams. Cole’s first game will be against the Nigeria River Hoopers on Sunday, CBS Sports reports.

Additionally, New Times Rwanda tweeted a video of what shows J. Cole in his jersey. He is also reportedly on the club’s roster.

#BREAKING: American rapper J. Cole @JColeNC is in Rwanda and could feature for local side Patriots at the upcoming Basketball Africa League.

The New Times has learned he is on the club's roster for the competition. pic.twitter.com/mhHOBCAvhx

Cole, 36, arrived in Rwanda earlier this month in order to quarantine to be ready to play in his debut.

It’s no secret that J. Cole is a big basketball fan. He played in high school at Sanford High School in North Carolina and was a walk-on at St. John’s. He never appeared in a game, however, for the Big East program.

Musically, Cole is still focused as well. His highly-anticipated forthcoming album, The Off-Season, is slated to drop on May 14. The cover artwork for the project features a basketball hoop.

Patriots Basketball Club, also known as simply Patriots, is a basketball club based in Kigali, Rwanda.