Nigerian Police Clamp Down On Students' Protests In Lagos 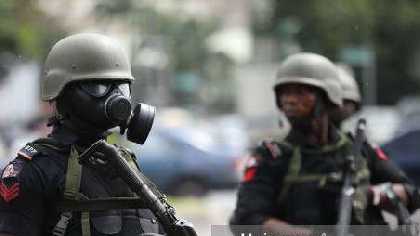 Rumours of planned protest by students at the bridge today

Police trucks are currently stationed at strategic points at the third mainland bridge in Lagos. This follows rumours of planned protest by students at the bridge today. Spokesperson of the Lagos state Police command, Benjamin Hundeyin said police officers led by the DPO of Adeniji Adele police station, Lanre Egbebai has taken over the bridge to prevent any form of protest.

However, the student body in question says it has no plans of protest today in Lagos, whether on Third Mainland Bridge or Apapa Port. NANs Vice President of External Affairs, Babatunde Afis told our man that information circulating on social media of planned protest on the Bridge is fake.

Let’s go to Kaduna where the government has issued a stern warning to protesting students- NEVER TO BLOCK THE KADUNA-ABUJA ROAD. Such plan is unacceptable! So says the Commissioner for Internal Security and Home Affairs, Samuel Aruwan who is insisting the move is a prelude to the breakdown of law and order.

Hands off!
That’s the stance taken by Governor Nyesom Wike’s camp as pertaining Atiku’s 2023 Presidential Campaign. Wike’s faction in the PDP says it won’t be a part of the campaign council until the National Chairman of the party, Iyorchia Ayu, resigns. This was the outcome of a meeting held in Port Harcourt, Rivers capital.

If you are a lover of animal skin also known as ‘pomo’, then you might take a liking to this advocacy from former National President of Farm Management Association of Nigeria Dr. Damian Agom. He says the plan by the federal government to propose a legislation to ban the consumption of ‘pomo’ is irrelevant. He’d rather the government direct its thoughts to raising awareness on the revival of the leather industry than a ban.