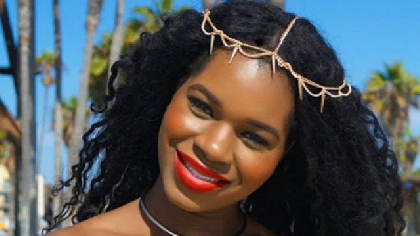 She has been featured in many prominent publications including Vice

Nigerian-American Rapper, Princess Vitarah, known for the vulgar lyrics has taken to social media today to announce that she is rebranding.

She said in a tweet that she deleted all her old music and is rebranding herself. She says, "I don’t have to hypersexualize myself in order to be successful."

Princess Vitarah began her career in 2016. She earned public recognition after her song, “Nigerian Pussy” went viral on video sharing sites such as YouTube and Facebook, receiving 4 million views in the first day alone. As a result of her sudden popularity, she has been featured in many prominent publications including Vice, The Fader, and XXL.

She made it public that she loves the way Kanye sings, and why she used vulgar lyrics.

"Probably Kanye, he’s my favorite rapper. I was little when he came out, so I loved “Flashing Lights” and… oh, “Can’t Tell Me Nothing” — that was my theme song growing up! I always wanted to perform. When I was little I used to take my teddy bears and line them up and perform to them and sing Rihanna songs and rap like Nicki Minaj. But, I’m also a big fan of 50 Cent and G Unit. I like what they do with music, and 50 Cent is so playful even though he does a lot on social media. He came for everyone in the game. That was his angle, which is smart. They don’t give a fuck, right? I’ve always been like that. I actually just wrote a song two days ago called “I Don’t Give a Fuck” and I’m gonna perform it tonight."

She didn't disclose what type of lyrics fans should expect but people are looking forward to her next song and what the lyrics will be like.