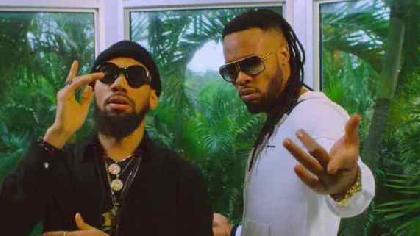 Nigerian music superstars, Phyno and Flavour were in a video shot alongside music mogul, Larry Gaaga in a studio, apparently making a new song.

The post is up on Notjustok's Instagram page. The blog team uploaded a video of the recording session involving Phyno, Flavour, and Larry Gaaga, affirming that it is a new tune coming up soon.

There was no sound at all to signify how the tune could sound. The silence of the video post which lasted a few seconds is also testimony that something new is coming up between the superstars. Of course, no one will give chance for a leak here in this studio, and the message is clear.

Both men have been working hard lately; Phyno partnering Masterkraft with to sing "Egbon." Phyno has also collaborated with Dj Kaywise, Davido, Don Jazzy, Tiwa Savage, Fireboy, and others in the past.

At this time, it is hard to tell what fans will get when Egedege is dropped in their hands.