New York: Fireboy, Others Spotted on a Billboard 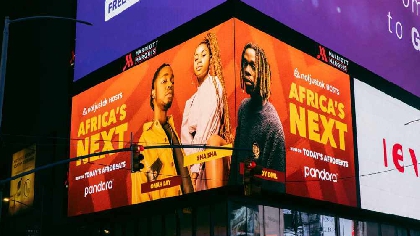 These acts join the likes of Tems, Tiwa Savage and Adekunle Gold

The billboard is part of the campaign for Pandora's Africa's Next radio mode hosted by Notjustok. Included in this node dedicated to emerging African artists spotlights artists like Gyakie, Fireboy DML, Joeboy, Kelvyn Boy, KiDi, Omah Lay, Rema, Sha Sha and others.

These acts join the likes of Tems, Tiwa Savage and Adekunle Gold whose faces have graced international billboards in recent times.

According to Juan Gomez, a curator at Pandora, he said this is an attempt "to “shine the light on the next generation of trending, emerging and innovative artists coming out of African pop music, predominately from West Africa”, Gomez shared.

He continued, “But we’re trying to go beyond Afrobeats and really touch on places like East Africa and, of course, what’s happening in South Africa. It’s so innovative as well. [It] is a place for people to get introduced to artists, as well as to tap into what is happening on the streets—what the current movement is. ‘Africa’s Next’ is really a play on words: Africa’s next artists coming up, but Africa is next because we know the future is Africa, so we really want to celebrate that with this campaign.”